It’s hardly surprising that by the end of April the only reflection I saw in the mirror was not of me but my friend Rosey! Writing 26 stories about her was not the easiest of challenges but fun just the same. 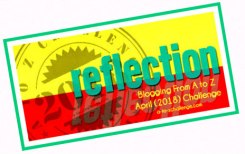 One thing I had to bear in mind was that whilst Rosey is very English, the majority of readers were not. In fact, a massive 72% were from India, followed way behind in second place by my American friends. The UK lot trailed at a lowly 7%! There are certain words and phrases she regularly uses which wouldn’t make sense to those of other nationalities  (they don’t always make sense to me!) and many activities she engages in are terribly British! This restricted me somewhat.

This year my hit rate was drastically down on 2017. I received a total of 3.8K visits compared with 5.9K.  As previously, one in six readers left a comment. When I went back to check on last years regular commentees (is that a word?) I found almost half of them didn’t take part this time around which goes some way to explaining it I guess.

As usual, I mainly stalked fellow flash fictioneers. As a rule and because of time restraints, I stuck to reading short pieces, preferably ones of 250 words or less. There were, however, a few exceptions, notably Iain and Varad whose writings verged on addictive! I must also give a shout out to Hilary who’s daily pieces about Canada were both interesting and informative,

Will I take part next year? The jury’s out on that one!

Thank you so much to everyone who followed me during the challenge. Your comments, critiques and suggestions were very much appreciated.

It’s only me, Rosey Pee!

Thanks for reading about me, but please don’t believe everything Keefie said. A lot of it, well, some of it was exaggerated…..a bit! We had fun though, didn’t we?

Anyway, I’ve got a joke for you. I need to concentrate to get it right. Ready?

A chicken saw a duck about to cross a road. ‘Don’t do it’ the chicken said, ‘You’ll never hear the last of it!’