Tom saw a time traveller on television. He was sitting in a chair wearing a special helmet and goggles and when he pulled the lever, he went back in time, and when he pushed the lever he went into the future. That looked fun! Tom thought he’d try it.

Daddy’s desk chair was perfect. He found a big wooden spoon for a lever and some string to tie it on with. Mummy’s tin colander looked just like the helmet. It just needed an aerial on top, so he got a twig from the garden and poked it in a hole. He put on his sunglasses and he was ready!

He closed his eyes a pulled back the lever. When he opened them he was in the park, but it didn’t look the same as it had this morning. The swings and the slide were made of wood. There was a tall thin tent on the grass and kids were sitting in front of it watching two funny puppets. He spotted his friend Charlie, but instead of riding his scooter, he was chasing a big wooden hoop and whacking it with a stick. He had funny clothes on; trousers down to his knees, long socks, a brown jacket, and a cloth cap. Then he saw Mr and Mrs Jones from next door. She had a funny little feathery hat on her head and a green and white spotty dress almost down to the ground. She even had a dead fox around her neck! Mr Jones usually wore a baseball cap and trainers, but now he had a hat with a brim, a stripy blue suit and shiny black and white shoes. All around, kids were skipping with ropes, playing hopping games, and rolling little tiny glass balls along the ground. Everyone looked so happy!

Tom pushed the lever forward and blinked. He was still in the park, but there were no children there. There were no birds singing, the flowers were dead and the trees had no leaves. The lake was filled with slimy mud and plastic bags and squashed bottles. Everything around him was grey and dusty. A sad looking old lady sat on the path holding out her hand.

Tom heard a ghostly voice in his ear. ‘Don’t let this happen Tom’ it whispered.

Tom didn’t like what he was seeing or hearing, so he tugged the lever upright.

‘What are you doing in my chair young man?‘ said Daddy.

‘Are you okay Tom?’ asked his big sister Tina. 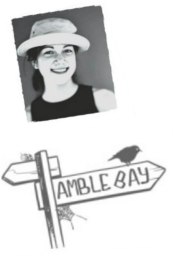