Fred Lion was a very successful businessman. His first job was delivering pizzas on a bicycle. A few years later he was carrying valuable jewellery and rare artworks around the country. Then he started his own company, Flion, personally flying items of extreme value worldwide. Before long, he had his own private jet in which to carry his priceless cargo. A bike to a plane in twenty years.

Last year he landed his biggest job ever, moving diamonds across the globe. He never arrived at his destination. He, his plane and the consignment just disappeared. Lost at sea the experts concluded.

The other day a Flion safe-case washed up on Brighton beach. Finders-keepers thought the excited person who discovered it. When he eventually forced it open, instead of his fortune he discovered a shrivelled pizza.

In a magnificent mansion on a faraway tropical island, Frederico Leone laughed, switched off the international news and poured champagne. ‘What would you like for supper sir?’ asked his servant.

‘A Hawaiian, fully loaded,’ he replied, ‘for old times sake’. 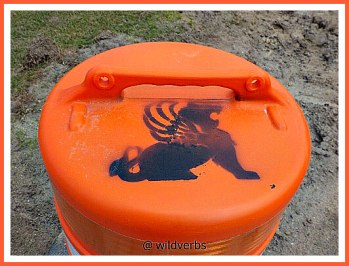 Thanks to Priceless Joy for hosting Flash Fiction for Aspiring Writers, and Wildverbs for the photo. Get well soon PJ!