He was a mysterious character. No one knew much about him. Clearly, he’d moved down from the north, his accent told us that. Not that he spoke to us much. If he came to The Windmill pub, he’d sit alone, facing the entrance, phone in one hand, beer in the other, constantly be looking around, sometimes starting when the door opened.

As soon as he moved here he had cameras fitted to his house and heavy security gates installed. Locals called it Fort Knox! If anyone came too close to him in the street he’d raise his hand to his waist. Going for his gun, the locals joked. Someone asked for directions the other day and he physically pushed them away before scurrying off the opposite way glancing over his shoulder as he went. He’s tilting at windmills the pub landlord once joked.

Last night his neighbour reported hearing a racket in the early hours. This morning his gate was wide open, which was unheard of, so much so that a neighbour persuaded the local copper to cautiously venture in. The man was nowhere to be seen.

The locals thought nothing of it. Probably gone back up north they said. 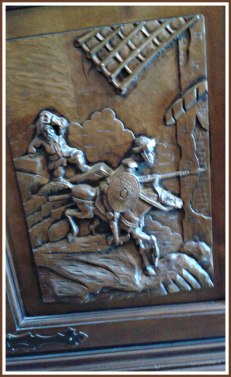 186 words for Sunday Photo Fiction which is hosted by Al Forbes. The picture is by C E Ayr

*Tilting at windmills is an English idiom that means attacking imaginary enemies. The expression is derived from the novel Don Quixote by Miguel de Cervantes.