Around 200 words for this week’s Sunday Photo Fiction.

My friend Rosey took my photo the other day.  Well, she meant to.  It was actually a picture of herself – yet again!

She struggles with her mobile phone.  She once claimed to be follicly challenged.  She meant to say ‘phonically challenged’ which still didn’t really make sense!

She likes running through the ring tones which can be very irritating.  Consequently, she’s never sure which one she’s using.  The other day it sounded like her doorbell.  When her pizza delivery arrived, she answered her phone.  Then the restaurant rang asking if she still wanted it and she answered the door!

She was at the theatre.  Waltzing couples filled the stage.  ‘Darling’ said the leading man, ‘You are the belle of the ball’.   Ding-dong went Rosey’s phone.

She was in church.  ‘Hark, the doves of peace’ uttered the priest.  Coo-coo went Rosey’s phone.

She passed an elderly man in the street.  It wolf-whistled.

Yesterday she collided with a lamppost while texting.  ‘I’m seriously injured’ she complained holding up a broken fingernail.  She’s now campaigning for all posts and pillars to be wrapped in foam.  Best of luck with that Rosey!

Actually, I need to call her.  On second thoughts, I’ll pop round!

If you are a recent visitor to my blog you may not be aware that I’ve been writing about My Friend Rosey regularly since 2008!  If you want to know who she is, where she lives, what she does, about her pets, etc., just click here and you’ll be magically transported to her dedicated site. 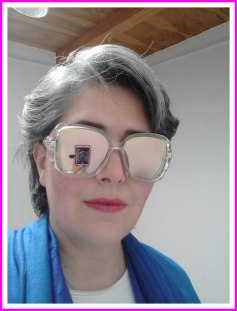 Thanks to Donna for hosting and to L L Jones for her picture.