In a concrete bunker midst the trees, an artist stares at a blank canvas, his mind empty, his thoughts an open space.

With a blow of his arm, his easel hurtles across the room. He tramples across discarded canvases and crumpled empty paint tubes, then crouches in a corner, head resting upon his knees. His inspiration has deserted him.

Through a rusty iron grid crisscrossing the broken window, a sunray permeates the gloom. He looks up and gazes at shadows flickering upon the peeling wall. They dance, they trip, they spin. The awful silence is broken by the merry song of a whistling bird.

He unfurls his aching body, rights his easel and grasps a canvas. He adorns his palette with paints of many colours, then with flicks of his wrist pictures begin to form. One, then two, three, more.

It was years before the studio was discovered. A glimpse of heaven one reporter wrote. Hidden treasures said another. Nobody knew who the creator was. Not a signature, not a single clue. 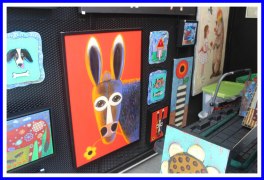 Sunday Photo Fiction is hosted by Susan Spaulding. My tale is very loosely based on her photograph!

22 thoughts on “One hundred and seventy-five words…”