Crouching in a deep hollow, Captain Billy and his men had a perfect view of the trail. Soon their foe would pass the bunker. The atmosphere was tense, their nerves on edge. An arsenal of carefully picked weapons was close at hand. After days of practice and preparation, they were ready for anything. Breathe deeply lads, breathe deeply.

The attack came suddenly. The enemy advanced at speed bombarding them with missiles; a shower of soggy sprouts, rotten cabbage and turkey bones.

They retaliated with a cascade of mouldy mince pies, leftover pudding and sticky trifle. The food fight was in full flow but it was not going well for Captain Billy’s battalion.

Twenty minutes later, energy sapped, they emerged from the ditch with their hands held high, plastered in the rotting remains of  Christmas fare. The loser’s punishment was to clean up the battlefield and return the spent weaponry to the garbage bins from whence it came. 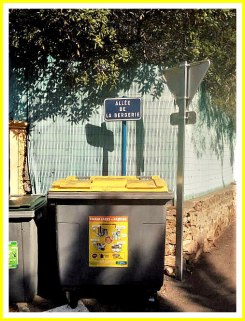 Sunday Photo Fiction is hosted by Susan Spaulding. The photo is courtesy of C E Ayr